FoMA Supports the Preservation of the Aluminaire House 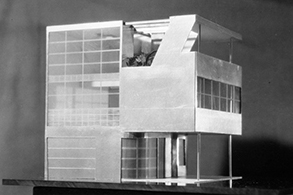 The Aluminaire House was a ground-breaking early Modern house that is unique among buildings that were instrumental in introducing Modernism to America. Designed in 1931 by architects A. Lawrence Kocher, managing editor of the Architectural Record, and Albert Frey, a Swiss Modernist who had studied with LeCorbusier, it was built as a case study to demonstrate the effective use of industrial materials such as aluminum and steel in a domestic building. With materials donated by companies in exchange for publicity, the house was built in ten days and received much attention in an exhibition sponsored by the Museum of Modern Art in New York that opened in 1932, “The International Style - Architecture Since 1922.” The house displayed many original features including corrugated aluminum siding, support for two upper floors of the house provided by six aluminum columns, large windows, a top floor terrace, steel doors, and black linoleum floors. It was intended to demonstrate the use of new materials, be affordable and low maintenance, and have access to fresh air and natural day light, hence its name Aluminaire.

Despite its auspicious beginnings, the house came very close to being demolished. After its debut in 1932, it was sold to Wallace K. Harrison who had it disassembled and moved to his Long Island estate as a weekend or guest house. Over the years the house suffered from modifications and neglect, and following Harrison’s death in 1981, a new owner requested permission to have it demolished. The house was eventually protected and donated in the 1980s to the New York Institute of Technology, and then eventually transferred to the Aluminaire House Foundation. After being disassembled, and put into storage, the Foundation announced plans in 2015 to move the house to Palm Springs, California, where there are other houses designed by Albert Frey.  In February of 2017 the house was transported to California and plans are underway currently for its reassembly and preservation as a museum open to the public.

The Alcoa company was among the companies that donated materials for the Aluminaire house. In the 1950s they commissioned architect Charles Goodman to design a “care free” home made entirely out of aluminum and commissioned more than 25 examples located throughout the country, including one in Lincoln, to serve as examples.