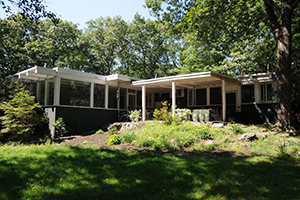 In 1953 a group of like-minded families from the MIT community got together to form plans for a Utopian community inspired by B.F. Skinner's book Walden Two. Founders Ann and Ranny Gras had a vision to create a neighborhood of young professional families with individual tastes and lifestyles who shared values and goals and would work together to create a self-developed neighborhood of affordable houses within commuting distance of Cambridge and Boston. 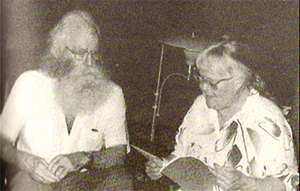 A non-profit corporation was formed, forty acres of land was purchased in Lincoln, and great care was taken to subdivide the property into 23 lots that would give each home its own privacy while maximizing views of the landscape.

Roads, water and sewage systems were put in. The corporation bought surveying equipment, and engineers in the group surveyed the land themselves. 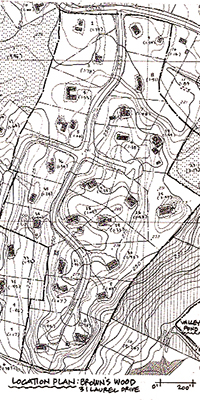 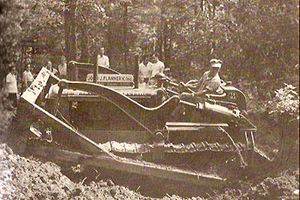 Houses were designed and built by the owners or their architects and planned for their own family's requirements. Although their roofs were flat, sloped or gabled, and each house might vary in style, size or materials, all embraced modern design, in reflecting the group's modern thinking. Living spaces were open, flexible and compact, lots of plate glass was incorporated, and the designs took advantage of living in such a beautiful, natural setting.

The group was passionate about their houses, their architecture, and their neighborhood. There were to be no capes, colonials or ranches; the group approved each other's house plans to be sure of that. The houses showed a variety of modern styles, and they were modest, simple and blended into their surroundings. Most important of all was the relationship of people and houses to the land Ruth Wales, an original homeowner still living in her Brown's Wood home, wrote in Lincoln by Lincoln that members contributed plenty of sweat equity to their community. 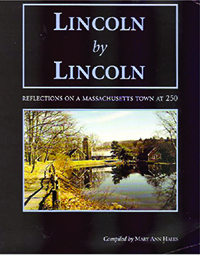 The first group of families bought a community chain saw to clear the land, a peavey to handle cut logs and a surveying transit to survey their neighborhood at many a family outing on the land. The group also jointly owned a concrete mixer and scaffolding for community use. It was a consensus-based group with frequent meetings to discuss neighborhood issues. Resources, responsibilities, and interests were shared. There were choral rehearsals, a recorder music group, sharing of shrubs and plants, bird watching outings, and long walks in the woods. Parties were held to welcome new families to the neighborhood and farewell parties given when others departed. A welcome benefit of living in Brown's Wood was a baby-sitting cooperative where members watched each others' kids, accruing points for when they needed a sitter themselves. 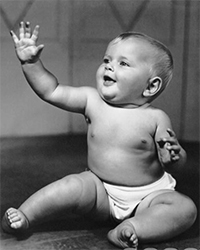 That sense of neighborliness and sharing continues today, as Brown's Wooders regularly open their homes to house tours, commute into Boston together, enjoy boating, swimming, fishing and picnicking at the Brown's Wood-created Valley Pond and get together for the annual summer block party for current and former neighbors. Rewarding friendships that developed among the group members and their children have lasted for decades. 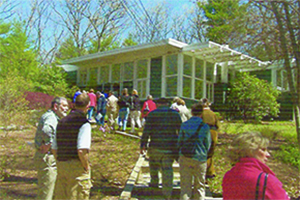 Four unique houses were featured on our tour. 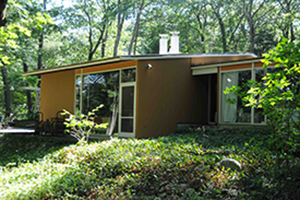 The WALES HOUSE (1959) designed by Henry Hoover and Walter Hill is in original condition with an original owner still living in it. The single-story, glass-filled house is sited below the road level with a large exposed glacial rock ledge at its front. A garage, barn, and screen house were added later.

The GROVER HOUSE (1956) was designed by Walter Pierce, who designed 4 other houses in Brown's Wood. It is a flat-roofed, T-shaped house built to fit unobtrusively into the natural landscape and makes extensive use of windows to bring the outside in. The house has had minimal changes. The study, screen porch and pergola were later added. The floor plan is open and designed for ease of traffic flow, and the original Cornell kitchen, ergonomically designed for workflow efficiency is still intact, over 50 years later.

Adapted from the research of Cornell University Professor Glenn Beyers in the early 1950s, the Cornell kitchen re-engineered the most-used room in the house by establishing a set of kitchen design criteria which considered both human and technological requirements. The countertops were adjustable to fit a woman of any height or arm length, the shelves were built to fit the actual supplies kept in the kitchen, and the kitchen was constructed to fit the family who used it. The current owners say that their kitchen is dated, but works perfectly for them - like a comfortable shoe. 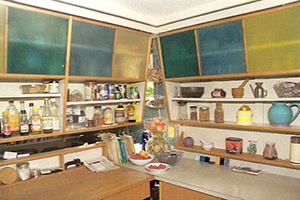 click here to learn more about the Cornell kitchen

The MORGAN HOUSE (1956) was designed by Walter Krokyn & Associates in the International style. The single-story house has a flat roof, square footprint, and sunken entry/foyer/great room. A louvered overhang on the south side acts a brise-soleil, shading the house from sun in summer and allowing sunlight and warmth into the house in winter. The house is beautifully built into the hillside, and is sited for maximum privacy and to capture views of both sunrises and sunsets. A storage wing, master bedroom/bath suite and kitchen/sun room were added later. 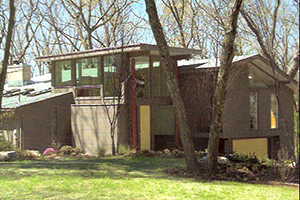 The POLUMBAUM HOUSE (1957) was designed by original homeowner and artist Nyna Polumbaum, with documentation assistance from Fisher and Brown Associates. The house is set perpendicular to Laurel Drive and descends at a slight downward grade into the rocky, wooded site. It is a multi-level house that was designed to be comfortable for a growing family. Large glass windows afford dramatic views of sunrises and sunsets and lots of natural light during the day.

The house was expanded in 2004 and 2005 with a new entry pavilion, open kitchen, enclosed carport, updated heating system, central air conditioning, and radiant flooring. Landscape improvements were made - dry stone walls laid, plantings that complimented the existing woodland environment were added, and a grass clearing for children's activities was created.

Brown's Wood was a unique experiment in living that is not frozen in time. The current homeowners are equally passionate about their houses, their land and their community. Architecture may have expanded over time, the trees have certainly grown up, but the relation of people, houses, nature and land is what makes Brown's Wood a unique and satisfying place to live.